The successful extensive joint-security operation involving the Kingdom’s security bodies and relevant agencies that resulted in the interception of several Jau Prison escapees on a vessel at sea during the early hours of February 9th attempting to flee to Iranian waters and another operation on the same day in relation to the two other incidents mentioned above,  led to the dismantling of a number of terrorist cells and the arrest of 20 persons belonging to them, including 4 women.

Chief of Public Security, Tariq al-Hassan, spoke at a press conference held on the day of the 9 February operation noting that the Ministry of Interior revealed details of the operation as part of its commitment to protecting citizens’ security and keeping the public informed about the level of terrorist threat in the Kingdom. He added that there would be some ongoing security operations.

These operations were successfully carried out between 9-19 February, resulting in the arrest of the aforementioned 20 wanted individuals. The four women among the arrestees were charged with aiding and abetting fugitives.

Evidence indicates that one of the arrestees was involved in the murder of First-Lt Al Hamadi in Bilad Al Qadeem on January 29.

Two of the arrestees were involved in setting up covert bomb-making factories and warehouses. Further investigation revealed that eight of the arrestees had received military training on arms and the use of explosives in Iran and Iraq. 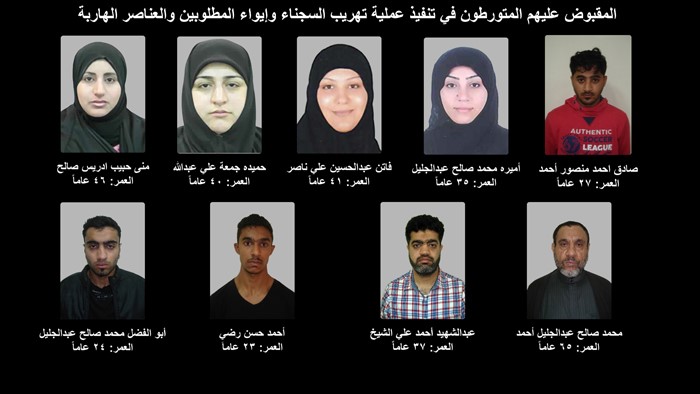 The arrestees who were involved in executing the Jau Prison jailbreak and sheltering fugitives are (in order, right to left):

1-      Ahmed Isa Ahmed Isa Al Mulali, 23, confessed to murdering officer Hisham Al Hamadi, saying he was assigned to do so by Hussain Dawood who escaped to Iraq.

6-      Hani Younis Yousif Ali, 21, assisted with another suspected in setting up secret warehouse of explosives.