It’s easy to listen to Ronald Reagan’s A Time for Choosing speech, delivered October 27, 1964, and marvel at how prescient he was.  What Reagan said half a century ago is just as true today as it was then.  Certainly, his remarks were dated; they were delivered in support of Barry Goldwater’s presidential campaign against Lyndon Johnson.  But replace Kruschev with Putin and warnings of Big Government with Obamacare or amnesty for those who break the law to enter our nation and that speech could just as easily be delivered today as it was 50 years ago.

But the remarkable clarity of Reagan’s speech lies not in his ability to see into the future. It is because he fully understood the destructive nature of modern statist liberalism; its demands on society and the people within it are no different today than they were in earlier times. 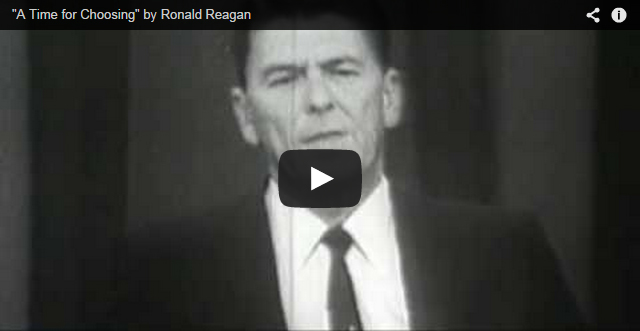 Ronald Reagan knew at his core that the precepts of statism are anathema to American constitutional liberty; that personal freedom must be sacrificed in order for it to take hold and that its price is “chains and slavery.”  He understood that statist liberalism, “must use force and coercion to achieve its purpose,” and that without force, no free people would choose to live under it.

This is what Reagan understood. Times have changed as well as the men and women who live in them but statism has not.  As a political dogma, it remains unchanged in its pursuit of subjegating people to the state.  It was this understanding of statist government that guided Reagan a generation after his speech to rightly call the Soviet Union an “evil empire,” and demand that Mikhail Gorbachev “tear down this wall,” which separated East Berliners from liberty.

The threats of statist liberalism have ebbed and flowed in the half century since Reagan gave his speech but today, it is at a high-water mark in America.  The federal government is forcing Obamacare on an unwilling public.  The president is seeking the effective destruction of American sovereignty by erasing our borders through executive amnesty for illegal immigrants. The most prosperous free-market economy in the history of man suffers under the yoke of government regulations and our growing debt poses an existential threat to the republic.

Ronald Reagan articulated a choice for America 50 years ago; whether its citizens would embrace, “the ultimate in individual freedom consistent with law and order,” or succumb to the attractive lies of statism that lead, “to the ant heap of totalitarianism.”