This week, the GOP unveiled a new plan that would simplify the tax code and provide some economic relief to businesses and families. The new plan would:

“The framework released by the White House and congressional Republicans will establish a tax system for individuals that is simpler, flatter and fairer, helping to lessen not only the enormous tax burden on Americans, but will also greatly reduce the outrageous compliance costs associated with today’s overly complex code.” Tea Party Patriots President and co-founder Jenny Beth Martin said in a statement released after breaking news of the new plan.

We all can agree that the current tax system does NOT work for America! With the current tax code being over 75,000 pages long and the IRS having to provide 2,000 different forms and instructions for filing, it shows that Americans need a reform that saves time and money. Click here to show your support for the new plan and urge Washington lawmakers to get behind this much-needed reform.

Republican senators killed the Graham-Cassidy bill before it even came to a vote after seeing that they wouldn’t get all of the favorable votes needed to pass it through the chamber.

“Promise made, promise broken. Once again, Senate Republican ‘leadership’ has demonstrated that its promises are meaningless,” said Jenny Beth Martin in a statement after the announcement was made. “The American people have a simple message for promise-breaking politicians: If you can’t keep your word, we will find someone else who will.”

The American people are frustrated with the disastrous ObamaCare law and the Graham-Cassidy bill was a last-ditch effort to get some positive changes to Obamacare before the reconciliation window closes. We understand that Graham-Cassidy was no where near the repeal we wanted to see, but it’s highly frustrating that Republicans couldn’t even deliver a fraction of the “full repeal” that they have been promising for years. Click here to help Tea Party Patriots remind these traitorous lawmakers of who put them in office!

According to gridlock reform advocate Sen. James Lankford in a Facebook Live interview, it would take 11 years to confirm President Trump’s judicial nominees under the current process. These politicians should be held accountable for their actions — or lack thereof! Help Tea Party Patriots urge Senate Republicans to support Senator Lankford’s proposed gridlock reforms that will ensure well-qualified judges will be appointed to the federal bench. Click here to sign the petition to end Senate gridlock! 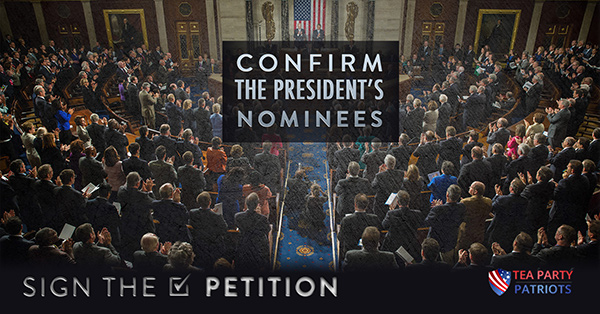