Businessman Donald Trump Joins Senator Cruz and TPP for September 9 Protest in DC:
We have an exciting announcement about our September 9 protest. On Wednesday, September 9, 2015, at 2pm EDT when we join Senator Ted Cruz on the West Lawn  of the US Capitol, we will also be joined by businessman Donald Trump. As a Breitbart news story says “Sen. Ted Cruz (R-TX) and billionaire GOP frontrunner Donald Trump will headline a rally on Sept. 9 at the federal Capitol. Cruz says he extended the invitation to Trump.” The story continues,”For his part, Trump says the rally is “essentially a protest against the totally incompetent deal that we’re making with Iran.”
We hope you can join us. We are working to building a bi-partisan coalition to stop this bad Iran nuclear deal. Senator Cruz has been leading the fight on this and asked us if we would help. We’re happy to answer that call and we hope that you can, too. Tea Party Patriots co-founder Jenny Beth Martin was quoted in CNN, The Hill and many more noting “This ‘deal’ does not prevent Iran from getting nuclear weapons; it virtually guarantees it. Congress must reject this terrible deal.”
More details about the event will be coming soon, but we are confirmed for 2pm EDT on 9/9/2015. Please go ahead and make plans to be there! 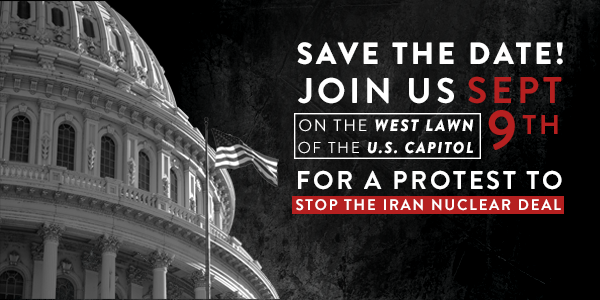 Attend a Town Hall Event Near You:
Our friends from Heritage Action have been keeping track of town hall events while Congress is on August recess. You should check their site often to find events in your area. We encourage you to go to a town hall event and take this guide for some suggested questions to ask. We’re trying to get them on the record on very important issues when they are back home. Record their answers with your cell phones and send it in to us if you are able to get them responding to any of these questions.
End Congress’s Obamacare Exemption:
Senator Ted Cruz and Wisconsin Governor Scott Walker have already promised to end Congress’ special exemption from Obamacare. We need your help to ensure Congress lives by the same laws as we do! Click here to learn more about Congress’s outrageous Obamacare exemption and visit our resource page to find out how you can help us fight back!
Fire The Speaker:
Congressman Mark Meadows of North Carolina has filed a resolution to declare that the Office of the Speaker is vacant. His resolution charges that Speaker John Boehner has: 1) Consolidated power and decision-making, bypassing the 435 Members of Congress and the people they represent. 2) Rendered Congress subservient to the Executive and Judicial Branches, diminishing the voice of the American people. 3) Used the power of his office to punish Members of Congress who vote according to their conscience. And 4) Consistently provided voice votes on controversial legislation without notice in order to pass it without resistance. Sign our petition if you think it is time for Speaker John Boehner to be replaced as Speaker of the House!
MRC-Tea Party Patriots Caribbean Cruise:
We are thrilled to be co-sponsoring the Media Research Center’s inaugural Caribbean cruise February 13-20, 2016 on Holland America’s amazing Westerdam cruise ship. TPP Co-Founder Jenny Beth Martin will join MRC Founder and President Brent Bozell, Family Research Council’s Tony Perkins, Duck Dynasty’s Alan Robertson, Senate Conservatives Fund’s Ken Cuccinelli and many more conservative leaders on the cruise. It is a wonderful opportunity to discuss the important issues of the day, business and life while sailing between the beautiful Caribbean islands! Click here to reserve your spot today!
Weekly Report from Washington:
Register today to join us for our Report from Washington each Monday at 1pm Eastern Time when Congress is in session. We’ll give you all the information you need to know about what is happening in Congress and what actions you should take for the coming week. Check out this week’s report.
Get Involved:
Be sure to visit our site’s Get Involved page and Groups page to find out more ways to contribute and stay up to date and connected.